Humans have a built-in primitive and automatic defence mechanism, which today we refer to as our ‘fight or flight’ response.

For a prehistoric man, the majority of his time would have been spent in a high-stress state, constantly monitoring for danger, such as when a sabre-toothed tiger eyed him up for lunch. His systems would have had precious little time to calm down and let his body heal and his long-term health would have suffered as a consequence. 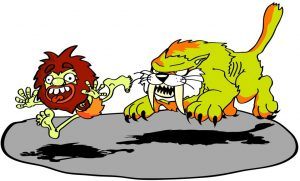 His response to being hunted would have been an instant release of a whole cascade of chemical changes in the body, raising breathing rate, blood pressure, blood sugar and heart rate. Non-urgent functions, like the immune system, would have been shut down and the conscious brain switched off. All that mattered was to maximise the speed of decision making and the ability of the body to fight the tiger or escape. Once the threat was removed, his body would have quickly returned to normal operation. All this would have happened very quickly.

Although we don’t have to face tigers now, our systems react exactly the same way to any perceived threat and these threats can be a lot longer lasting, which is not healthy for us. Being stuck in a traffic jam, or having a difficult work situation, will be very stressful and trigger our fight or flight response, with the same cascade of chemical changes and the same preferential control of internal systems. Clearly, it’s not good to have prolonged periods in this state, where for instance, our immune systems are shut down.

Another natural response can be a feeling of anxiety or fear. When in fight or flight mode we lose our ability for rational thought and our memories are blurred. That’s why we are unable to clearly remember what happened in accidents.

When in a real threatening situation, the surge of chemicals will be consumed by the physical reaction, which is important to help the body get back to normal as quickly as possible. However, if your perceived threat is while you are inactive, like sitting on your sofa watching bad news after bad news on TV, then the chemicals are not properly metabolised, which eventually can lead to a dangerous build-up of ‘stress hormones’. There’s a lot of evidence that any accumulation can cause problems, such as high blood pressure and increased susceptibility to a number of chronic conditions. Hence why we all hear stress can be a killer.

Our fight or flight response is built in. We cannot eliminate it. But there are steps we can take to reduce our stress environment and to develop ways to control stress. Meditation and mindfulness are techniques which you can learn from us. Our HeartMath technology is a wonderful and yet simple tool to help teach you how to lower your stress.

Much is common sense. It should be no surprise that it is incredibly important to have a good supporting social network of real friends. In fact, latest research has shown that it is the most important factor in life expectancy.

Take some time to think about what causes you stress.

Your job, your relationships, your physical environment. And don’t underestimate the stressful impact that constantly watching, or reading, bad news has on you.

Physical exercise is highly beneficial because it helps reduce the build-up of toxic stress hormones and gets you to a healthier, calmer state.

This website uses cookies to improve your experience while you navigate through the website. Out of these, the cookies that are categorized as necessary are stored on your browser as they are essential for the working of basic functionalities of the website. We also use third-party cookies that help us analyze and understand how you use this website. These cookies will be stored in your browser only with your consent. You also have the option to opt-out of these cookies. But opting out of some of these cookies may affect your browsing experience.
Necessary Always Enabled
Necessary cookies are absolutely essential for the website to function properly. This category only includes cookies that ensures basic functionalities and security features of the website. These cookies do not store any personal information.
Non-necessary
Any cookies that may not be particularly necessary for the website to function and is used specifically to collect user personal data via analytics, ads, other embedded contents are termed as non-necessary cookies. It is mandatory to procure user consent prior to running these cookies on your website.
SAVE & ACCEPT
Scroll To Top